Cottage in Lake of Bays
Jump to section 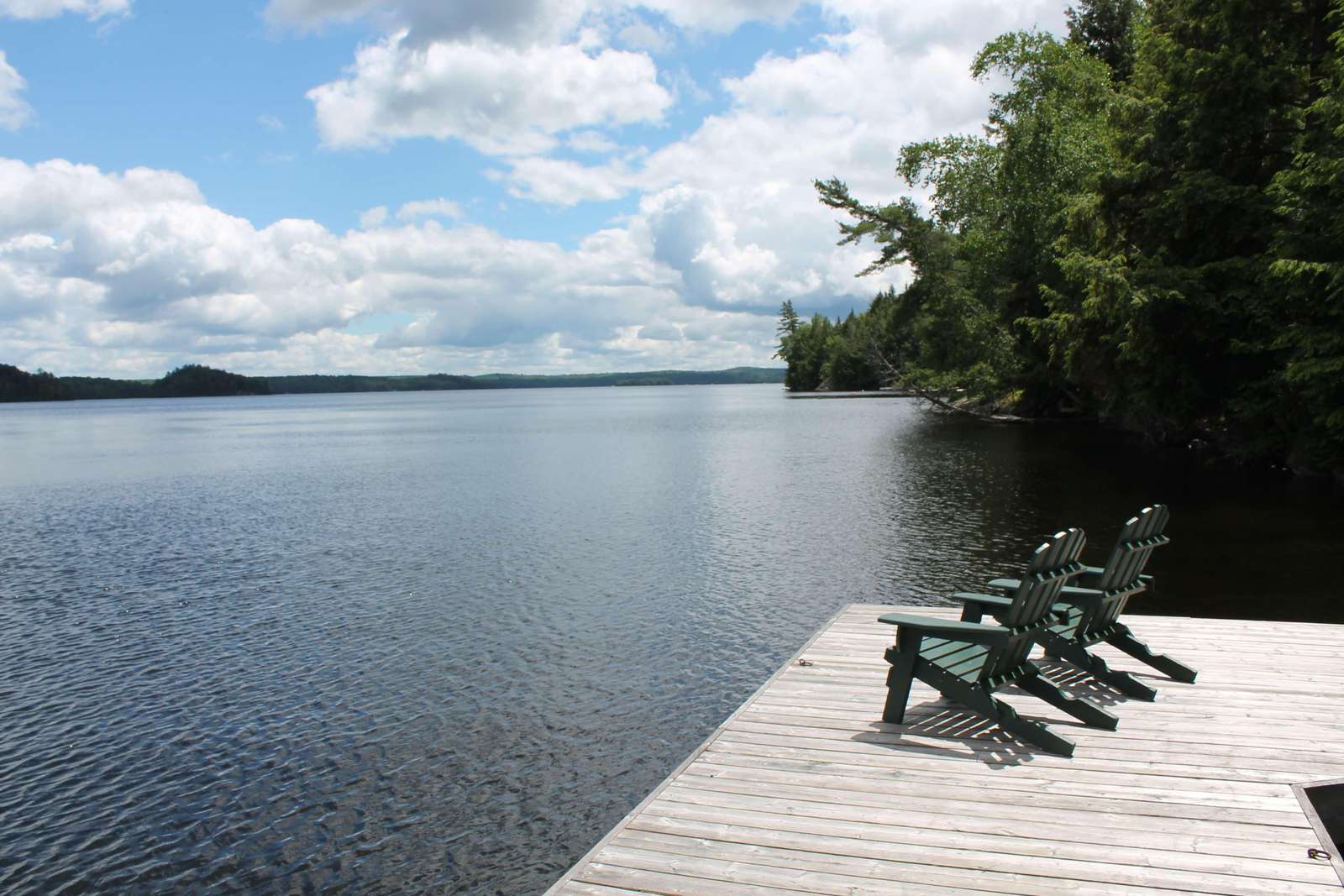 This cottage has it all. Located on Lake of Bays in the heart of Muskoka. Steeped in history from the steam ships to settlers from the 1800's.

This cottage has it all. Located on Lake of Bays in the heart of Muskoka. Steeped in history from the steam ships to settlers from the 1800's. Just sitting in the Muskoka room you have such a beautiful and peaceful view of the lake. It would be very easy to have a whole day go by just relaxing. This 4 season cottage has been renovated with a new kitchen, living room and bathroom. This cottage is settled in the trees with breathtaking views of Lake of Bays.

Follow the brick pathway down to the dock where you can moor up to an 18' boat. Spend your days on the beautiful waters of Lake of Bays swimming, water skiing or just relaxing and taking it all in.

Lake of Bays is a large lake in the District Municipality of Muskoka in Central Ontario, Canada. It is located in the Township of Lake of Bays, which is named after the lake. Ontario Highway 35 runs north and east of the lake.

The lake is fed by Oxtongue River, as well as other rivers and creeks flowing from the north-east (Boyne River and its tributary Sixteen Mile Creek, Ten Mile Creek, Hollow River, St. Mary Creek).

Lake of Bays is a deep, cold, clear lake which forms an important part of the Muskoka watershed. Despite its size and basin shape, low fertility and a short residence time combine to make it only moderately productive. Lake of Bays water is clear, and the maximum secchi disc reading obtained was 8 m (26 ft).

The surface layer, which is 9 meters (30 ft) in depth, varies in temperature throughout the year. In the summer months of July and August, the surface layer can have an average temperature approaching 21 °C (70 °F), while the top few metres can warm to about 26.5 °C (79.7 °F). Below the top layer, the summer temperature drops rapidly to around 7 °C (45 °F).

The 3 acres which The Jaffary Cottage is built on was purchased just after the war in 1946. In 1949 the cottage was constructed. In those years there were no roads to speak of and much of the lake community was serviced by steam ships delivering holiday goers to Bigwin Island and other smaller resorts. From 1910 or so, when cottages were first being built at Bona Vista people thought this lot was unbuildable because of it’s height from the water.

In fact the building materials and lumber all had to be dragged across the ice with sleds and horses in winter and then dragged up behind the Hadwen’s cottage to where it stands now. The builder, Mr. Stone, then set about building the entire place with hand tools as the hydro lines had still not reached Bonavista. He was a very good carpenter and even made the windows and screens that are still working well 70 years later.

Since then the cottage has undergone a couple of extensions and was completely taken down to the studs and renovated in 2016 by Mr. Stone’s son Lloyd, who also built the garage and guest cottage above it. Most of the original cottage’s integrity was preserved during the renovation. If what you want is a real Muskoka cottage experience as opposed to a city home in the country,  than this is the place for you. The cottage sleeps 6, plus 2 more can sleep in the guest cabin which was renovated in 2019.

There is a brick and wood decking pathway leading down to the dock. There is Wifi and Satellite TV, DVD’s and Netflix for quiet evenings around the cabin. Soak up the paintings, sculptures and 19th century antiques while sitting in front of the living room fireplace and spinning some vinyl. Enjoy your meals eating either on the screened in porch looking at the lake, inside around the kitchen table or sitting at the bar. The dishwasher will help you clean up after the meal so you can spend your time relaxing. The cottage is also very book and board game friendly, lots of places to read and play. It has 2 bathrooms one with a tub and shower and the other with just a shower.

Tucked up on 3 acres of land you will enjoy fantastic views, wonderful privacy, warm breezes and less mosquitos than many other northern retreats. There is wonderful swimming from the dock, a sandy swimming bay and plenty of canoes, kayaks and paddle boards to get out on the water. If you are a boater there is a large slip and a boat launch down the road at South Portage. There are several marinas on the lake the closest being South Portage And Port Cunnington. The fishing for bass and pickerel right off the dock is plentiful and fun for young fishermen. More advanced fishermen are probably going trolling for lake trout and the occasional northern pike. Dorset is a great place for lunch and shopping. Dwight has a wonderful beach and Baysville is home to The Lake of Bays Brewery.

Enjoy a glorious care free week or two of lazy days and gentle evenings including camp fires and star gazing. We are 25 minutes from the shops and restaurants of Huntsville & Bracebridge and close to Deerhurst and Bigwin for some of the best golfing in the province. For cyclists there are great hilly training roads along the same routes as the annual triathlon. The garage has 3 mountain bikes for your use. Sailors love the big winds that come down from Dwight, Haystack and Ten Mile  Bays and regattas can still be found all over the lake. Lastly if you like hiking there are wonderful options nearby in both Algonquin and Arrowhead Parks.

If you want a classic summer experience than The Bona Vista Social Club is waiting to take you and your family back to a simpler holiday time -without you having to rough it at all.

A security deposit is required with all bookings. I will be responsible for any and all damages caused by myself and my guests and I agree to pay all long distance phone charges, excessive internet usage, cleaning and/or garbage charges, damages caused by pets, and any penalties as per these Terms and Conditions, caused during the term of my rental. I authorize Muskoka Vacation Rentals to deduct the cost of such damages, charges, penalties and repairs from the Deposit. If there are no such damages, charges or penalties, the Deposit will be returned to me in full within 14 days following the last day of the rental period. If such damages, charges or penalties amount to less than the total Deposit, the balance will be returned to me. I agree and understand that I am responsible for any and all damages, charges, penalties and repairs which might exceed the Deposit amount. I understand that these costs will be charged to my credit card if deemed necessary. I, the cardholder, expressly consent and authorize the charging of my credit card.

Rate varies due to seasonality and holidays.

Please select your dates on our online booking calendar for an exact quote.

We’ve had the pleasure of staying at the Jaffary Cottage on Lake of Bays several times. We love everything about it. It’s been renovated with all the amenities and yet somehow keeps its cozy, country feel. The screened in sunporch is spectacular for outdoor dining and morning coffee, the kitchen is fully equipped, the bedrooms are very comfortable (our favourite is the loft) and the whole property is beautiful. An early morning kayak and sunset on the dock can’t be beat. We highly recommend it!

Property is not available for the selected dates
Book Now